With the intention to start a new life for himself, Oscar moves to the town of Podunk on an Oklahoma native reserve. He hopes for a quiet place where he can finish writing his books, but living alone in his new house is a frightful affair, quite literally as he is spooked by the resident ghost Sylvia Snyder.

Oscar is prepared to start running, but once he calms down Oscar finds that Sylvia is a great companion. Oscar enjoys hearing about Sylvia’s past life experience and her time spent as a ghost. It seems like moving to Oklahoma was a good choice, but then stranger and more dangerous things start to occur. It seems that trouble has found him once again. 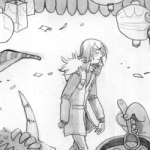 A writer from Chicagoland who has recently moved to Podunk in order to run from certain troubles. He does not like to talk about himself though he loves to hear others stories.

A lonely ghost who haunts the house that Oscar moves into. She has a yearning to learn about the modern world and is a kind companion. 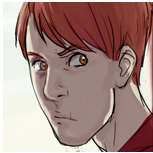 He moved to Oklahoma when he was young. His identity as a werewolf is hidden within the community. Not even his mother knows. This secret causes him to be distant from others.