The supernatural have always been hiding among humans and Keiji Inoue is one of them. Specifically, he is a shape shifter. Life has been hard ever since Keiji’s parents died and he moved in with his godfather Jin, but worst of all is his problem of spontaneously shapeshifting (usually into a monkey). His condition makes it especially hard at school. He is often running away during conversations or rushing to the washroom during class, but he continues to attend class in the hopes of gaining real friends.

One day, Rika, the girl that he has a crush on is attacked by a group of thugs. He tries to rescue her, but ends up being nearly captured in his monkey form. The thugs follow Keiji home and discover that his godfather is a kappa. At the time, Keiji is too scared to save his godfather, but later that day he goes on a rampage and kills the guys responsible. Giving up on the idea of a normal human life, Keiji leaves the country before the people his godfather was protecting him from can show up. 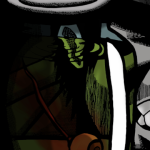 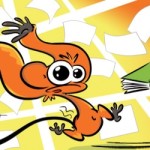 After leaving his dysfunctional home, he uses his abilities to become the mob boss of Liberdade in Brazil.

She was once saved by Keiji, but she was too scared at the time to be thankful for his help. Now she is trying to redeem herself by helping him in any way that she can.