As he wanders through an apocalyptic winter world, Charles Snippy believes himself to be the only human left alive. He is on the verge of giving up on life when he spots another person in the distance. This person introduces himself as Captain and is overjoyed to have discovered Charles Snippy.

Though Snippy is worried that this Captain person is a little insane, he reluctantly allows himself to be rescued. He is quickly introduced to another human survivor called Pilot, a loud-mouthed and stubborn girl who worships Captain. Despite Pilot’s complaints that Snippy is intruding, Charles Snippy is welcomed into Captain’s kingdom. Together they transform the gloomy landscape into a pleasant place to live and shamelessly make fun of people, technology, language, and other nonsensical human concepts. 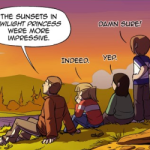 A seemingly insane yet ever pleasant man who seems to be living in a world consisting of his own fantastic imagination.

A level headed guy who is the sole survivor of a science team. His focus is to keep on surviving.

A moody and playful girl who is obsessed with everything Captain. She dislikes Charles who is too reasonable and does not believe in the awesomeness of Captain.